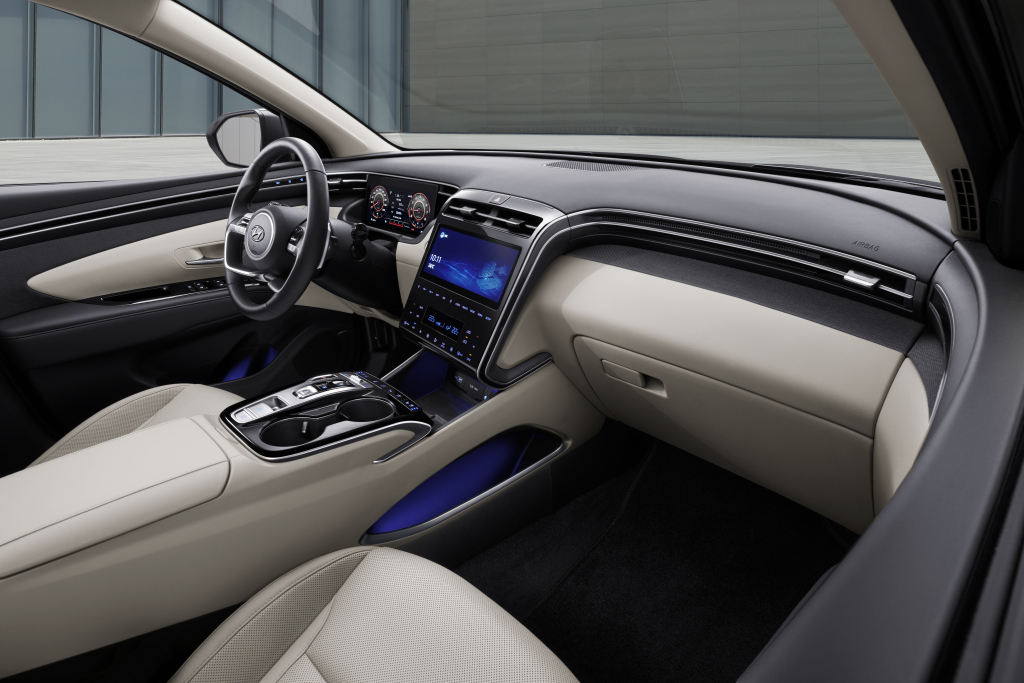 The Hyundai Tucson has been a really popular car from the South Korean automaker in the compact SUV segment since its launch in 2004. Currently, in its 3rd generation of production since the 2016 model year, the Hyundai Tucson is again making the headlines due to its massive redesign for the 2021 model, with an expected generation upgrade as well. The exterior will get a completely new design, although it has some of the Mercedes-Benz EQC vibes to it. But one of the main highlights of this Tucson is the prices, it’s prices are expected to be as low as $25000, which is a very competitive price bracket.

The 2021 Tucson is again making the headlines because some spy photos have again surfaced the internet, this time of the interior that showcases a massive central touchscreen display for the infotainment system, somewhat similar to what you get in a Tesla

There hasn’t been any info regarding the trim levels and features for the 2021 Tucson from the company yet, but we’ll get to know that pretty soon as the launch of the 2021 Tucson gets nearer which should be sometime around fall 2020 with an expected price range of $25,000 to $34,000.

As mentioned earlier, the 2021 Tucson is expected to get a generation upgrade, with major changes both inside and out. The exterior design is getting a huge overhaul which looks more futuristic and sharp compared to the previous model. If the latest interior spy photos are anything to go by, the interior is also getting a huge update as well, with the main change being the huge touchscreen infotainment display in the centre console. This will be a huge departure from the comparatively tiny 7” touchscreen display equipped in the outgoing 2020 model. The entire system is supposed to be controlled by the huge central touchscreen display with a few buttons on the sides, probably allowing quick access to the most used controls. The steering wheel is also getting a redesign with the usual array of steering-mounted controls.

Moreover, Hyundai is also expected to equip the 2021 model with a more powerful engine and a more spacious interior, compared to the outgoing model.

How Well Does the Hyundai Tucson Perform?

Hyundai officially hasn’t released any information about the engines for 2021 Tucson yet, but it is safe to assume that it will be getting a more powerful engine this year around along with the new generation update. Nonetheless, coming to the 2020 Tucson, it has two engine options. First is a 2.0L 4-cylinder engine powering the SE and Value trims, which produces 161 HP and 150 lb-ft of torque. Another is a more powerful 2.4L 4-cylinder engine producing 181 HP and 175 lb-ft of torque, powering the rest of the trim levels. Both engines are mated to a six-speed automatic transmission. Moreover, Front-wheel drive comes standard in all trims, while all-wheel drive being optional. The base engine in the 2020 Tucson is a bit underpowered. But it does compensate that with a more powerful 2.4L engine option. The performance of the 2021 Tucson should be similar to the 2020 model with a 0 to 60 mph time of 8.8 seconds and topping off at about 130 mph, which although is quite slow but is quick for its segment.

Since the 2021 Tucson is getting a generation update with massive changes both inside and out, it is also expected changes in terms of its mechanicals as well. So it will be a bit too early to comment about its ride quality and handling. But if we take the 2020 model as a reference, it doesn’t disappoint with its genuinely comfortable ride quality, especially on rough roads. Nonetheless, the 2021 Tucson won’t much of a hard core off-roader as some might think of it being a crossover SUV. It will be more at home on the tarmac. There aren’t any official statements about the brakes in the 2021 Tucson from the company yet. The 2020 Tucson was fitted with ventilated discs at the front with solid discs at the back and could be expected to be the same for the 2021 model as well.

Although the 2021 Hyundai Tucson hasn’t been crash-tested by NHTSA yet, it is safe to assume that it would perform similar or probably better than the 2020 model which managed to get a perfect score of 5 stars, with 5 stars in all the individual tests except for the overall side poll test and the rollover test where it scored 4 out of 5 stars with only 15.50% of rollover risk.

As mentioned earlier, the 2021 Tucson hasn’t been officially announced by Hyundai yet, and so we cannot confirm any details about the trims yet as the car is expected to get a generation update. Nonetheless, if the previous models of the Hyundai Tucson are anything to go by, there should be a few choices of trims levels which different levels of features and amenities according to the price. Looking at the 2020 Hyundai Tucson, it has a total of six trim levels viz. SE, Value, SEL, Sport, Limited, and Ultimate. The SE and Value trims are reasonably well equipped with additional specs and features as you go up the trim levels along with a more powerful engine. The 2020 Tucson ranged from about $23,500 to $33,300. Accordingly, the 2021 Tucson can be expected to range from about $25,000 to $34,000. Talking about the 2020 Hyundai Tucson, the base SE and Value trim got its power from a 2.0L 4-cylinder engine good for 161HP and 150 lb-ft. of torque. The rest of the trims are powered by a 2.4L 4-cylinder engine good for 181HP and 175 lb-ft. of torque. The base 2.0L engine is a bit underpowered for its competition. The 2021 model is expected to get more powerful engines. 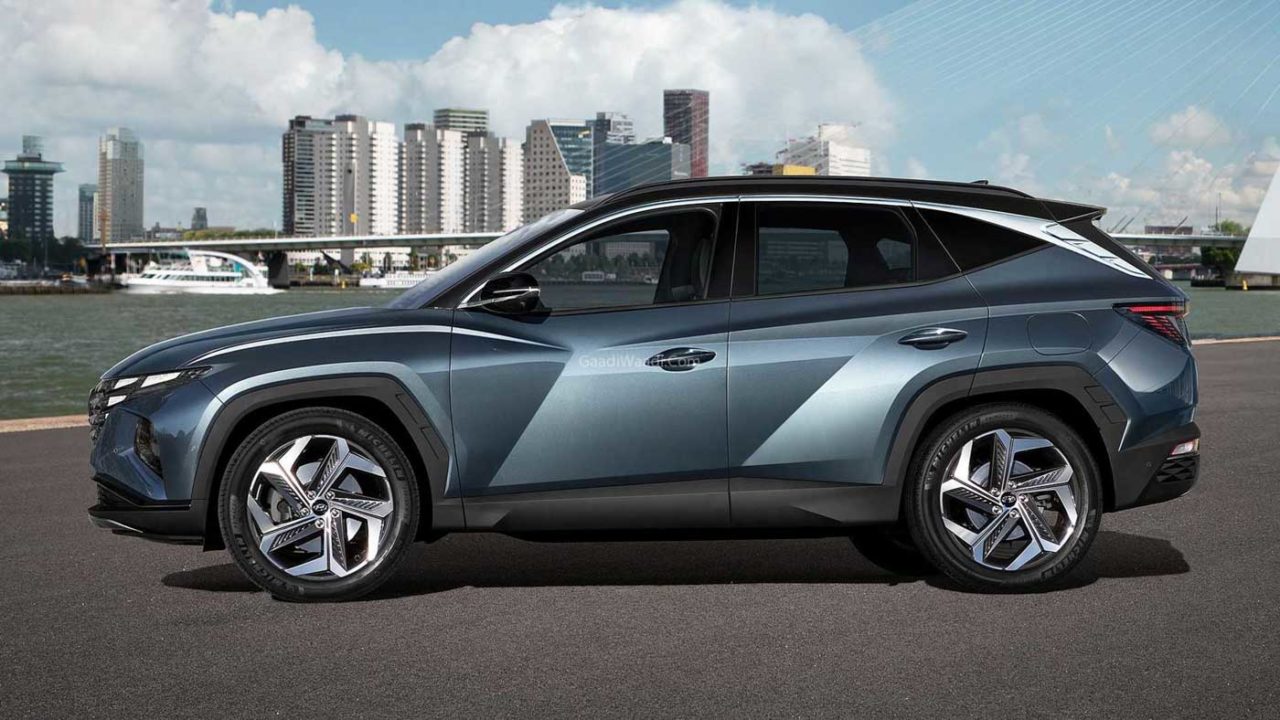 Until there are official statements about the trims for the 2021 Hyundai Tucson, let us take a look at the key features and amenities in the different trims levels on the 2020 model for reference.

Starting off with the base SE trim, it gets equipped with 17” alloys, 7” touchscreen for the infotainment system, a 6-speaker sound system, a height-adjustable driver’s seat, and automatic headlights.

The SEL trim gets bigger 18” wheels, dual-zone climate control along with rear-seat vents.

The Sport trim adds an even bigger 19” wheels, an 8-speaker premium audio system, LED headlights and taillights, and an auto-dimming rearview mirror.

The Limited trim reverts back to smaller 18” wheels. It has a heated steering wheel, a 360-degree parking camera, and along with that, a power-adjustable passenger seat.

The top-of-the-line Ultimate trim gets an upgraded forward collision mitigation system, a panoramic sunroof, an 8” touchscreen display for the infotainment system with navigation, and a ventilated front seats as well for added comfort.

Which Variant Should you Go For?

It is quite early to comment about the best trim for the 2021 Hyundai Tucson as the car hasn’t been officially launched yet and there aren’t any words regarding the trim levels from the company yet.

So talking about the 2020 Hyundai Tucson, the base SE trim is quite adequate in terms of all the necessary features and specs for its price with most of the standard advanced safety features including forward-collision warning with automatic emergency braking and lane-keep assist. Nonetheless, the weak 2.0L engine is a letdown. The SEL trim hits the sweet spot with its more powerful 2.4L engine and host of additional comfort features at your disposal.

Previous: What You Didn’t Know About Aeries 1 Lidar Technology
Next: 586 Quincy Street: Changing How Real Estate Investment Is Managed